The most current Release of the euchromatin is now available at http://flybase.net/annot/. Please see the FlyBase Release Notes for more details.

The annotated D. melanogaster sequence was first released on March 24, 2000, and constituted Release 1 of the genomic sequence (Adams, et al., 2000). After Celera/BDGP filled 330 gaps and changed ~3000 annotations, Release 2 was made public in October, 2000. This whole genome shotgun assembly had ~1300 gaps.

The 116.8 Mb Release 3 euchromatic sequence is described in the Release 3 Notes and in Celniker et al. 2002. This assembly had 44 gaps remaining.

To create the 118.4 Mb Release 4 genomic sequence, 21 gaps were closed, and the assembly was validated in collaboration with the Genome Sciences Centre at the British Columbia Cancer Agency in Vancouver, Canada, using fingerprint analysis of a tiling path of BACs spanning the genome. This assembly has 23 gaps remaining.

The changes in Release 4 are diagrammed below. 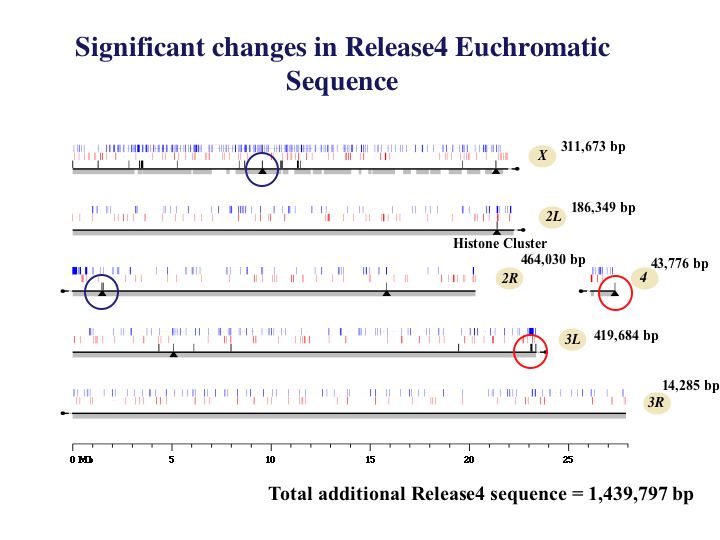 At the end of each chromosome arm are the number of base pairs that were added in Release 4. The red circles indicate sites of corrected inversions. The blue circles indicate gap closures between Release 3 and 4.

The BDGP will continue to finish the genomic sequence to high quality. The Release 5 sequence is projected to be available by Fall 2005.